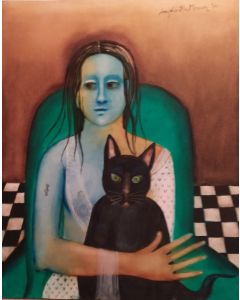 Born in 1940, Burnpur (West Bengal), Anjolie completed her schooling at Lovedale after which she pursued a degree in English Literature from the Delhi University. Later following a brief spell at Sir J.J. School of Art, she received formal training in painting at the Ecole Nationale des Beaux-Arts, Paris on a French Government scholarship from 1959-61. She pursued further studies in France, U.K., and USA on the invitation of respective Governments during 1980-81.

Anjolie is a well-known muralist. She has had over 35 solo shows in India and abroad and has participated in several group shows  along with I, II, III International Triennale by Lalit Kala Akademi in 1968, 1972 & 1975; Paris Biennale, France in1980; at New York & Washington D.C. in 1980.

She is a recipient of Padma Shri by the Government of India and she is on the board of trustees of Indira Gandhi National Centre for the Arts (IGNCA). Her work was shown in a major retrospective held at the National Gallery of Modern Art, Mumbai in 2002, which also toured other towns including Chennai, Delhi and Bangalore. Her life and work has been featured in important publications and films made for Doordarshan and CNN.

She lives and works in New Delhi.