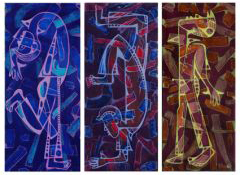 Having started out with huge oil painting chock-a-block with detail, I have continuously distilled technique and fine-tuned my focus so much so that even my language has changed. Not only in the subject matter, but this progression of ideas has also been like a peeling back of layers in each successive work. Reducing color, Clutter, size as well as the layering that was characteristic of my earlier works, my current work has become more austere, and elemental but conversely, the depth of expression has become more intimate, more in-tune with the worker and the subject. In the latter half of this work, I have eliminated even color to suggest not just the blurring of the lines between the man and the metal but the total boundary-less amalgamation of the scrap and the worker- giving life to the scrape by making it an integral part of the human being. Where does one begin and the other end?

In Apurva Desai's canvas the self is given over to the experience; he paints monumental human forms dissolved into its location. Born 1962 in Baroda, Apurva presently lives and works in Ahmedabad, Gujarat. He pursued Diploma {Painting} from C. N. College of Fine Art, Ahmedabad (1987) and Masters {Painting} from M.S.U, Baroda (1989). He worked for 2 years under the guidance of Rekha Rodwittiya. He has held 15 solo shows including at Art Alive Gallery, New Delhi in 2006 & 2002; at Ahmedabad in 2006, 2002, 1994, 1993, 1991, 1990 & 1987; Kolkata in 1997. He has also participated in several group shows, more prominent amongst which are Emerging India, presented by Art Alive Gallery and S.A. Fine Arts, London, held at London in 2007; Romania in 2005; London in 2003; Goan Art Forum in 1995 and Fifth Northern Region Art Exhibition in Delhi in 1993. He has been honored with several scholarships and awards from Gujarat State Government in 1987-88; Ministry of Human Resources, New Delhi in 1989-90; Kanoria Centre for Arts, Ahmedabad in 1991; Vikram Sarabhai Foundation, New Delhi in 1991-92; awarded by Lalit Kala Akademy Gujarat in 1985, 1991 &1995 and Navdeep Sanskrutik Pratisthan, Gujarat in 1990 for his contributions to Art and Charles Wallace India Trust Residence Award, London in 2003.