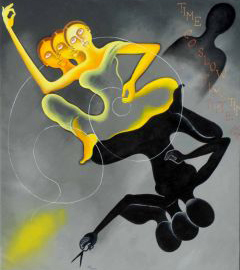 Arpana Caur, born 1954, has been exhibited since 1974 across the globe. Her solos apart from Delhi, Mumbai, Calcutta, Bangalore and Chennai have been held in galleries in London, Glasgow, Berlin, Amsterdam, Singapore, Munich, New York and in Stockholm and Copenhagen National Museum. Her retrospective of 40 years was held in National Gallery of Modern Art Bangalore in 2016 with Svaraj Archive.

Was awarded a gold medal in VIth International Triennele 1986 in Delhi and AIFACS Award. Received Lalit Kala Grant, AIFACS Award and filmed by BBC, Stockholm TV and many Indian TV channels. She was commissioned by Hiroshima Museum of Modern Art to execute a large work for its permanent collection for the 50th anniversary of the Holocaust in 1995, and by Bangalore city and the city of Hamburg to do large non-commercial murals in public spaces. Since 1981 she did three large non-commercial murals in Delhi.

She has a concern for environment, time, spirituality, condition of women and growing violence in the world, rooted in the language of ancient Indian Sculptures and Miniatures.