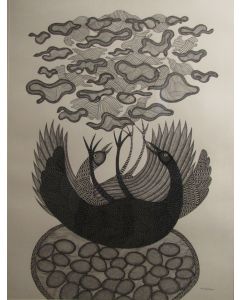 Born in 1971 in the Gond tribal village of Patangarh, Madhya Pradesh Bhajju Shyam left his village and came to the city of Bhopal in search of work at the mere age of 16. In Bhopal, he apprenticed under his uncle Jangarh Singh Shyam, by then an established artist, who encouraged him to strike out on his own when his talent became apparent. National and international exposure followed soon after. In 1998 Shyam’s work was chosen for a group exhibition at the Musee des Arts Decoratifs, Paris. Since then his work has been shown in the UK, Germany, Holland, and Russia. In 2001, Shyam received a state award for the best Indigenous Artist. His most well-known work, The London Jungle Book, is a visual travelogue of his 2002 visit to London, where he went to paint the interior of an upmarket Indian restaurant. The book, published by Tara Books and the Museum of London, was released in November 2004. A three-month-long exhibition at the Museum of London followed shortly after. Other notable exhibitions include his individual  showings at Arteutopia Gallery, Provincia di Milano, Milan (2005), the Crossing Borders Festival, The Hague, Netherlands (2005), The Museum in the Docklands, London (2005), the Natural Science History Museum, Bhopal, Madhya Pradesh, etc.