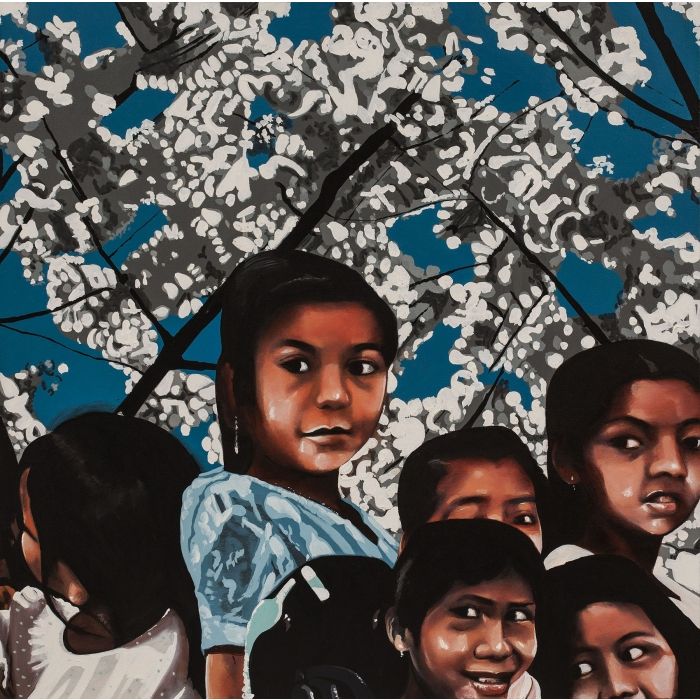 My paintings are about the issues closer to my heart. In the new series of works, I painted the children glowing in their dark and brown skin, the social marker of their existence. Selecting dark or brown complexioned persons or women in a burka with unidentifiable complexion. I postulate the body as information. The physical body of a person has become the embodiment of information regarding his identity.

Born 1966 in Kerala, Binoy did his National Diploma in Fine Arts from R.L.V College of Fine Arts, Kerala. He was the artist-in-residence at Aicon gallery, new york in 2007; Banff Centre for Arts, Alberta, Canada in 2000 and Cholamandal Artists Village, Chennai during 1994-98. He has held six one-man shows at New Delhi, Canada, Chennai. He has also participated in three Two-men shows and many group shows which include, Reading Paint, Bangkok in 2007; Definitively Provisional II, Copenhagen, Denmark; 11th Asian Art Biennale, Bangladesh in 2004; Miami Art Festival, Sponsored by Jacob Karpio Gallery Costa Rica in 1999; 41st National Academy Exhibition, Rabindra Bhavan, New Delhi in 1998. He has received several awards including the National Award by National Academy of Arts, New Delhi in 1998; a fellowship from the Madhavan Nair Foundation, Kochi in1993 and a scholarship from the Arnawaz- Vasudev Charitable Trust from 1994 to 1996. The artist lives and works in New Delhi.