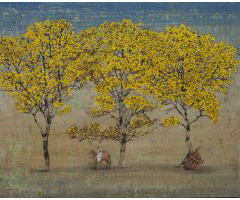 He has been invited to participate in Residencies and workshops that include the Residency by George Kith Foundation at Dambola, Sri Lanka in 2003; ‘ National Scholarship from Ministry of H.R.D., Government of India in 1996-1997. He was awarded for KK Hebbar Foundation Award, for 2002; National Scholarship from Ministry of Human Resource Development, Government of India in1996. He lives and works in New Delhi.