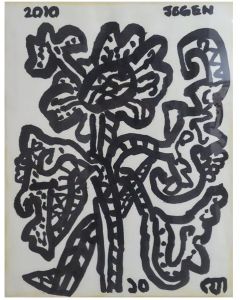 During all these years, man and life, their complex co-existence, are the central concerns of my work. I am also sometimes fascinated by Natures' organic qualities, its design, and rhythmic construction. People continue to be the dominating influence in my work. For the last few years, I have been deeply disturbed with the man's brutality upon man, in Iraq, in the U.S.A., in Russia, in the U.K. or in India. Religious and racial riots in Gujarat, bombing and destruction by one country on another country, terrorist attacks on helpless children in Russia, or on the innocent public in other parts of the world, torture of Iraqi prisoners in Abu Gharib Jail and political killings in the village of Bengal, or other parts of India, torture, and rape of women and young girls, have all affected me deeply. This suppressed humanity makes me alert, sad and disturbed. The present turmoil has affected me as a human being and is directly reflected in my art.

Born 1939, Faridpur, completed his graduation in Fine Art from the Government College of Arts and Crafts, Kolkata (1960). He later studied in France during 1965-1967 on Government Scholarship at Ecole Nationale Superieure des Beaux-Arts, Paris. He has exhibited in his works in various international exhibitions including the ‘Triennales’ at New Delhi held in 1972, 1975 & 1978; at the Sao Paulo Biennale, Brazil in 1979; ‘Museum of Modern Art and Royal Academy of Art, London in 1982, Hirschorn Museum & Sculpture Garden, Washington D.C. in 1982; II Havana Biennale, Cuba in 1986 and Takaoka Municipal Museum of Art & Meguro Museum of Art, Japan in 1988; Realms of Fantasy, Hong Kong, 2004; Inverting/Inventing Traditions, Grosvenor Vadehra, London, 2007. He has been awarded at II Havana Biennale, 1986 and at International Prints Biennale, Bharat Bhavan, Bhopal in 1995. He was honoured with Kalidas Samman by Madhya Pradesh Government in 2001. Besides these honours, he has received numerous National Awards. He lives and works in Santiniketan.