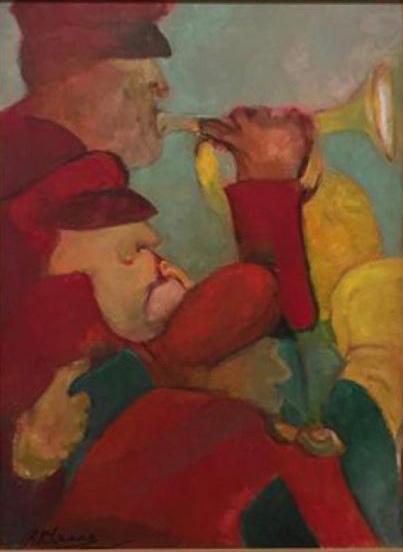 Born in Lyallpur (now Faislabad, Pakistan) in 1925, pre-partition India, where he attended evening classes at the Mayo School of Art, Lahore. His migration to India after the Partition and the chaos following the aftermath deeply scarred him.

Krishen Khanna’s oil on canvases and drawings largely portray the middle and lower classes, their trials and tribulations. The figurative form in his works remain intact in conjunction with expressionist lines and energetic colours. His subjects for his works are mainly labourers and women engaged in mundane tasks. His work has also often focused on music and musicians, as though he were trying to capture its undulating rhythms in oil and in two dimensions.

He is the first Indian artist who was awarded the Rockefeller Fellowship in 1962. He was granted an artist residency at American University, in Washington, D.C. in 1964; he won a fellowship from the CECA, which brought him to New York, where he began experimenting with Abstract Expressionism. Since then he has exhibited his works widely in India and abroad.

Apart from several one-man shows, he has participated in group shows like the Tokyo Biennale 1957 and 1961, the Sao Paulo Biennale 1960, the Venice Biennale 1962, the Festival of India in erstwhile USSR and Japan in 1987 and 1988, among many others.

He is a recipient of Government of India’s highest civilian awards viz: ‘Padma Shree’ in 1990 and the ‘Padma Bhushan’ in 2011. Many publications have been brought out on his life and work namely ‘Krishen Khanna: Images in My Time’, ‘The Embrace of Love, ‘A Critical biography’, ‘The Great Procession: A mural by Krishen Khanna’ to cite a few.

He lives and works in Gurugram, Haryana.