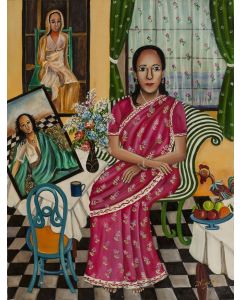 Nayanaa Kanodia graduated from Lady Shri Ram College, New Delhi, in Economics (Honours). She won the National Scholarship of the Govt. of India. An economist turned painter, Nayanaa is entirely a self- taught artist except for a year’s apprenticeship with Anjolie Ela Menon.

She had her first solo show in 1986 in Mumbai and has held numerous solo exhibitions since then in India and abroad. In 1998, she was selected by The Commonwealth Institute from all the artists of the Commonwealth Countries for a solo show in their recently renovated complex in London. In 2001 she was invited by the Victoria and Albert Museum, London to exhibit her paintings and to give a demonstration of her painting techniques. She is the first Indian of non-British origin whose works are in the collection of “Paintings In Hospitals”, UK, previously named as a British Museum.

She has conducted Art Camps in India and abroad. Her work also features in several auctions of Indian Contemporary Art internationally

Nayanaa”s works are held in many major public and private collections in India and abroad including the Musee International d’Art Naïve, Paris.

She is featured in a prestigious international book ‘ Women in Art ‘ by Reinhard Fuchs.

Impressed by the messages/ meanings conveyed in her paintings, a consortium of schools in Los Altos, USA is using her work as a medium of instruction to their students.

She lives and works in Mumbai.