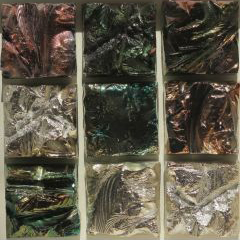 The ceramics of P.R Daroz has reflected in India the transition from domestic vessel to sculpture and architectural installation, in the course of his forty-year involvement with clay. Born at Hyderabad in 1944, Daroz completed the first leg of his education with a Diploma in Applied Arts and Design (1967), as well as further training in sculpture (1967-68), both from the College of Fine Arts and Architecture in Hyderabad. He then went on to pursue further specialization in ceramics under Jyotsna Bhatt in the Faculty of Fine Arts, MS University, Baroda (1970-72).

For his contribution to the field of Indian ceramics, Daroz has been felicitated with various awards from government bodies as well as international art panels. They include the Medallion and Trophy, OBDIOS International Biennale, Portugal (1987), Honoured for creativity in ceramics by Ceramics World Symposium, Yugoslavia (1989), Elected as a member of International Academy of Ceramics, Geneva (1990), Honorable Degree, 3rd World Ceramics Treinnal, Zagreb, Yugoslavia (1990), Awarded a senior fellowship by the HRD Department of culture, Government of India, New Delhi (1998), National Award for Ceramics Lalit Kala Academy, Delhi (2004).

A potter known for his bold and innovative techniques, Daroz has worked in a variety of registers. If he has produced utility-driven tableware, he has also created animal figures in the pursuit of sheer delight and experimented with abstract forms. His ceramic images address and dramatize the dilemma of form over function, and he utilizes the sheer materiality of clay along with his ease of skill and technique, to create works of complete virtuosity.