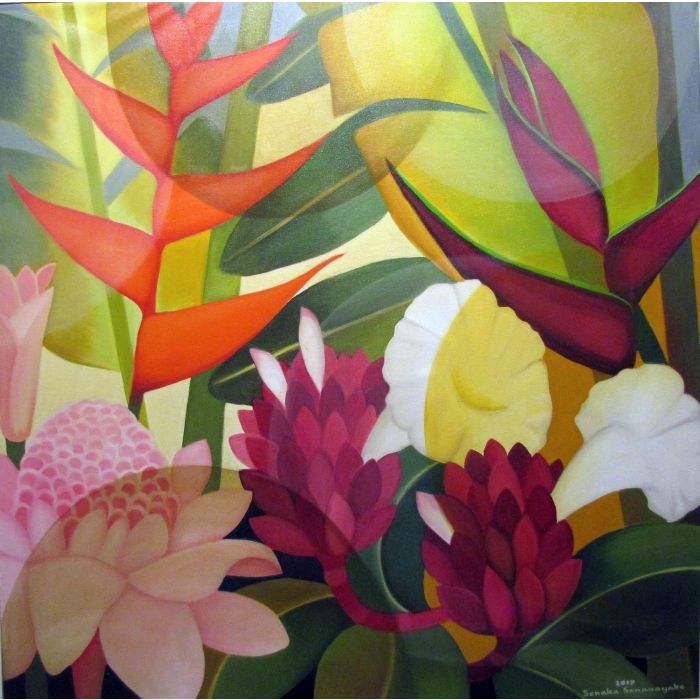 Senaka Senanayake (born 1951) is a Sri Lankan artist who attained fame early in life as a prodigy, for his works of art. He held his first international one-man exhibition at the age of ten, in New York. Although he painted copiously and held many shows both in his native country as well as aboard, it was only after he went to Yale school for graduation in Art and Architecture did he realize that his true calling lay in the field of art. Yale, at that time, was pulsating with vibrant political activities and Senaka with his family’s political background was naturally drawn to it. However, those years at Yale were more crucial for him as an artist, for till then he had been largely self-taught. But at Yale, the formal classes of art training expanded his knowledge to the history of the art of the entire world till then.

After moving back to Sri Lanka post-Yale, Senaka immersed himself headlong into painting. His years of training at Yale had helped him evolve a mode of expression which had matured greatly. He also began to delve deeper into the various environmental issues concerning Sri Lanka. Of them, he was particularly bothered by the rapidly decreasing plight of the rain forests, and his present series of works is an attempt to engage the audiences by making them aware of this pertinent situation.

Senaka’s work has been shown in most parts of Europe and South Asia with critical acclaim. To date he has more than 100 solo shows to his credit, and numerous group shows in the countries of Europe, China, Australia, Japan, Singapore, Czechoslovakia, Korea, and Egypt to name a few. His work has been documented by Metro Goldwyn, British Movieton News, BBC TV, London, Yeo Soo TV, South Korea, TV Austria, and Star TV, India. Various journals, magazines, and newspapers such as The New York Sunday Times, Washington Post. London Times, Weser Kurier, Germany, UNESCO Features, Paris, National Geographic Magazine, Asia Week and many others, too have devoted their mediums to document the talent and work of this august artist Senaka Lives and works in Sri Lanka.