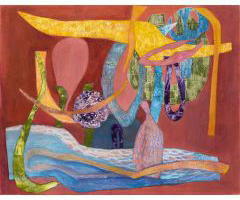 Tara Sabharwal was born in Delhi, studied painting at MS University, Baroda and completed her Masters from the Royal College of Art in London on a British Council scholarship. As a student in London, the Victoria and Albert Museum bought her work and she showed at Bernard Jacobson and Christopher Hull galleries.

On returning to India she had solo shows at Art Heritage and Cymroza galleries and after three years left for the UK on the Myles Meehan fellowship. This was followed by the Durham Cathedral fellowship and shows at the Laing Art Gallery, DLI Museum, and the Darlington Art Center along with teaching in Newcastle and Sunderland Art colleges.

In 1990 Tara visited New York and since then lives between India, UK, and NY, making paintings and prints and continuing to show internationally. She has had solo shows at Harewood House, Mercury, La Monte, East-West and Rebecca Hossack galleries in London; Galerie Scherer, Michael Oess, Galerie Schwerpunkt and Martina Janzen in Germany; Henry Street settlement, John Jay, Stephen Harris and Gallery 678 in New York and Art Heritage, Cymroza, Nazar, Sakshi and Art Alive galleries in India. She has shown at HISHIO, Japan, Orvieto arts festival, Italy and Versailles, Chamalieres and Duoro Print Triennials in France and Portugal. In 2013 she has had solo shows at Arts Karsruhe (Germany), Idler Gallery (London), Martina Janzen gallery, Dusseldorf and later at the Manhattan Graphic Center, NYC.

She has taught art at the Guggenheim Museum, Cooper Union, Studio in a school, City University (CUNY) and the Rubin Museum of Art. She has received the Henry Street fellowship, International Cultural Collaboration Grant, Cooper Union Residency, Hishio International Exchange Residency in Japan and her work is in the collection of the British Museum and Victoria and Albert Museum (a second collection) in London, the Peabody Essex Museum in Boston and the Library of Congress in Washington DC.