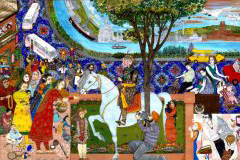 The Singh Twins are contemporary British artists of international standing whose award-winning paintings have been acknowledged as constituting a unique genre in British Art and for initiating a new movement in the revival of the Indian miniature tradition within modern art practice. Describing their work as Past Modern (as opposed to Post Modern), their work engages with important areas of critical debate - challenging existing stereotypes and redefining generally accepted, narrow perceptions of heritage and identity in art and society. Combining elements from western and eastern aesthetics they assert the value of traditional and non European art forms to the continuing development of contemporary art practice - exploring cultural, social and political issues of global significance within a highly decorative, often witty and symbolic style which has universal appeal and transcends cultural barriers.

Their contribution to the arts on an international platform was officially recognized by their home city in UK, when they were made Honorary Citizens of Liverpool in 2009. Their work also received formal recognition at the highest level of the British establishment in 2011, when they were each awarded an MBE in the Queen?s Birthday Honours List, for services to the Indian miniature tradition of painting within contemporary art.

With paintings in private and public collections worldwide from the Royal Ontario Museum Toronto to The London Museum, the Twins continue to be invited to speak at institutions such as:

Tate Gallery, London
The Art Gallery of Ontario, Canada
The National Gallery of Modern Art Delhi and Mumbai
The Asian Art Museum, San Francisco and
The Library of Congress, Washington

Exhibitions of paintings from the significant body of work which they have created since 1987, have been hosted by Museums and Galleries around the world, including:

For over more than two decades the Twins work has received significant interest from academics, art students and University research scholars alike and is now incorporated into the formal Education system of Britain as elsewhere.

Their contribution to the field of arts has achieved wide media attention - featuring in numerous art magazines, journals, and newspapers across the globe. Do television and Radio coverage include house guest appearances on Bloomberg TVs Style, Carlton TVs Open House with Gloria Hunifford? and CBCs Here and Now; and interviews for BBCWomens Hour, Mid Week, Front Row and Belief. In 1998 a film titled, Singh Out Sisters which followed their first exhibition in Germany was screened by Granada Television as part of a series of programs profiling the creative talent of North West England and in 2001 an Arts Council Funded documentary on their work by Independent filmmaker Suman Bhuchar, titled, Alone Together received 'The Best Film on Art' prize at the Asolo International Film Festival.

That same year the Twins were short-listed for the Asian Women of Achievement Awards (in the category of Arts & Culture) and in 2002 were appointed official Artists in Residence to the UK Manchester Commonwealth Games.

Amongst the mainstream publications profiling their work are such titles as the Penguin History of Scotland; The Oxford History of Art: Portraiture; The National Portrait Gallery's The Portraiture Now; Marg Publications New Insights into Sikh Art and The Oxford Encyclopedia of Women in World History.

A New Direction
Since 2006 The Singh Twins have been developing their creativity through the medium of film. Their first production titled, Nineteen Eighty-Four and the Via Dolorosa Project, is a short documentary about one of their most famous works depicting the Storming of the Golden Temple in 1984 and their latest film, titled "The Making of Liverpool" is an animated history of Liverpool.

Both films received the Creative Media Award at the Hollywood Sikhs Lens Film and Arts Festival.

Other Interests
Although more widely known for their paintings, The Singh Twins are also published, writers and authors. Publications include a children?s poetry book titled, ?Bindhu?s Weddings? inspired by their paintings of British Asian life and an art history book titled, Images of Freedom which draws on a selection of posters from the personal archive of popular and mass-produced imagery pertaining to India which the Twins began collecting during their time as postgraduate students in 1990.