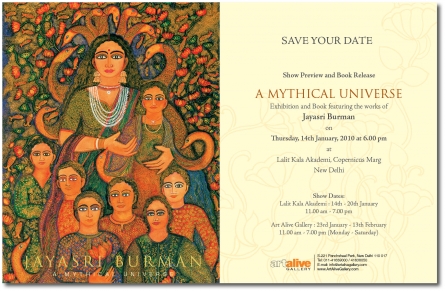 A Mythical Universe captures the remarkable journey of Jayasri Burman, one of India’s leading women artists, drawing upon her life and art through decades. Jayasri’s art, derived from the rich pictorial folk tradition of India, has carved out its own singular idiom today.

As Prof. Partha Mitter describes in the book, “Jayasri’s themes deal with the feminine, with the empowerment of women through the traditional language of the sacred in Hinduism, her inspiration is the variety of incarnations of Shakti or female energy, the great Goddess, who is considered the mother of the universe. With her muted but engaged feminism, Jayasri Burman refashions the universe of Hindu mythology, which acquires in her paintings an entirely contemporary meaning and nuance. This is the best sense tradition, reinterpreted, reinvented, revised and re-imagined for India of today.” Pritish Nandy further reiterates, “The significant factor about Jayasri’s art is that it is not just about our past, our tradition, our mythologies, it is also about today. It is this enchanting integration of cultures, language, idiom and narratives that makes her such a remarkable chronicler of our times.”