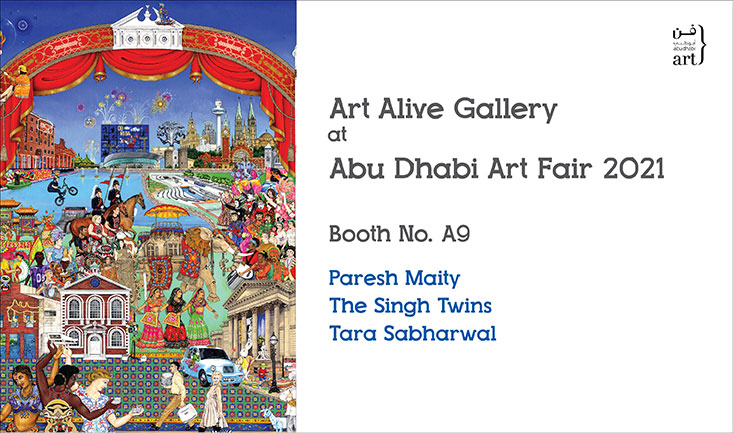 Art Alive Gallery, New Delhi, India will be presenting a specially curated collection of artworks that will conceptually look at the idea of home through different perspectives. Art Alive will bring to the fair, three artists - Paresh Maity, Tara Sabharwal and The Singh Twins to showcase their art in a presentation that negotiates the idea of home through different perspectives– memory, diaspora and identity.

Paresh Maity is a renowned contemporary artist from Tamluk, West Bengal, India. Over the years, Paresh has experimented with a variety of forms and mediums and while attempting to capture the essence of his surroundings via his art, the artist has always recounted nature as his muse. Classified by vibrant colours and rich textures, Maity’s art in this collection exists in a fluid space that balances between the real and the abstract. The artist captures the essence of his home through his memory that spans cities, towns, temples and more rendered in the style of abstraction. In his characteristic style, the artist translates and reinterprets the memory and experience of place, drawing from existing architectonic arrangements to present newer configurations of space and time.

Tara Sabharwal is an international artist who hails from Delhi, India and is based in the USA. Tara has been exploring hybrid monotype paintings as a means for opening unexpected possibilities for abstraction for over two decades and she is well known for her colourful and subtly layered paintings. Her recent works include curated projects around art and migration that addresses a space between two cultures where relationships and negotiations consistently define and redefine themselves. Working as an artist with a dual identity (Asian-American), Tara’s work largely stems from a sense of multicultural selfhood. In this collection, her works exist in the dream-like interface between the conscious self and its subjective world. Tara’s process involves working in a fluid manner that gives her a fresh perspective on things as she works with the aesthetics of moving shapes, the drama of the edges and the interplay of the figures.

The Singh Twins are internationally renowned, contemporary British artists whose award winning work explores important issues of social political and cultural debate and re-defines narrow Eurocentric perceptions of art, heritage and identity. In addition to the Indian miniature tradition of painting, they also draw on the artistic language and conventions of other traditions, east and west, old and new - including ancient Greek and Roman, Persian and Medieval European manuscripts, European Renaissance art, 18th Century British Satirists, the Victorian illustrators, Pre-Raphaelites, Art Nouveau, and photography. This exhibit features selected Artists’ signed and Numbered Collector’s Edition Giclees representing the diversity of themes for which they are known – Politics to Pop Culture, Multicultural history and Society. Through their works and their signature eclectic style, they continue to celebrate their Indian heritage even though they contribute to histories, cultures and societies around the world.

All the artists, in Art Alive’s curation work with a wide variety of media spanning from oils to acrylics to mixed media etc. Through their distinct individual style and form, they explore the idea of home through different perspectives.