Exodus 2020 | A Solo Exhibition of Ink Paintings by Jatin Das 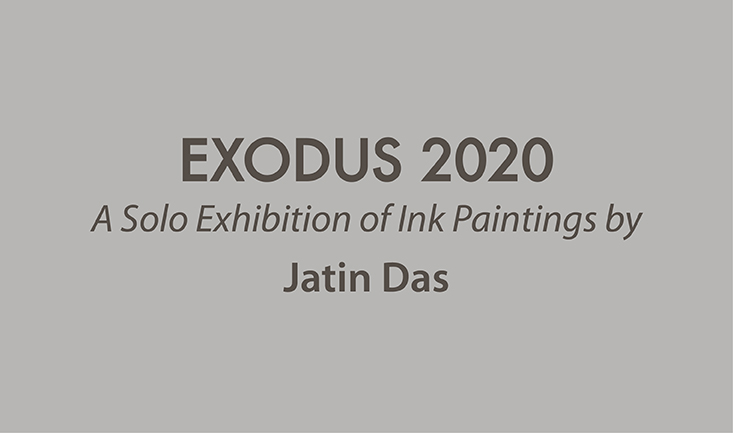 Exodus 2020 | A Solo Exhibition of Ink Paintings by Jatin Das

Art Alive Gallery brings to you a solo show of Jatin Das, Exodus 2020, a series of ink paintings done by the artist during the lockdown in the wake of mass migration of labourers across Indian cities. The pandemic changed the world in many ways, Jatin Das looks at the fragility of human existence in these challenging times. Captured in Ink on paper, in his signature style, the artists sensitively looks at the struggle, the poverty and the experience of migrant workers in urban India.

“Like everyone else, I was stuck at home for more than six months. I barely stepped out. What I missed the most was going to my studio, where I work from morning to late evening. Instead, I spent most of my time cooking and cleaning. But I was restless at home. I had two hundred odd acid free paper, some inkpots and lots of brushes. So I began painting. What appeared in the newspapers and television, and what I had observed over the years, all spontaneously came pouring out. And that is how the series was born, which I have named ‘Exodus 2020’. My inspiration for my work has always come from the working class. Those who make roads, lay bricks, paint high rise buildings. The beldars, thhelawallahs, kudawallahs, manhole cleaners, rag pickers, house-help, construction workers, all those who toil non-stop. During the lockdown the migrant workers, who build our homes and cities, had to go back to their villages. There was no work in the city, so no earnings. Hundreds and thousands of them had to walk bare feet, some on cycles, and others atop buses, without fearing the scorching sun, without food and water. They went with their little belongings, tucked under their arms, or on their heads. Men and women carried their children on their shoulders, in baskets, in their tired arms, quietly walking, through days and nights, non-stop. Normally, I paint figures, who are bare bodied, beyond any specific context of time and place. I don’t have any other elements of clothing, architecture, foliage or animals, or anything that would localise it. But this is a special series, a response to our troubled times.”

Born in December 1941 in Mayurbhanj, Odisha, India, Jatin Das is a painter, poet, sculptor, muralist, print-maker, teacher, cultural expert and institution builder and has been working now for almost 60 years. He went to study at Sir JJ School of Art, Bombay, under Professor S.B. Palsikar. Das has held 68 one-man shows, in India and abroad and has participated in numerous national and international exhibitions and artist camps. His works are primarily in oil, watercolour, ink and Conté. He has also created several graphics, murals, sculptures and art installations. His works have been featured in several public and private collections in India and abroad and have been auctioned by major international auctioneers like Sotheby’s, Christie’s and Osian’s. In 2012 he was the recipient of the prestigious Padma Bhushan award. Jatin Das has extensively lectured at numerous art and architecture colleges, museums, public forums; he is also an advisor to many government and private bodies. His commitment to preserving arts and crafts and in creating a sensitivity towards art and aesthetics led him to a dream almost 40 years ago - the JD Centre of Art. Jatin Das, the Founder and Chairman of the Centre, envisages classical, modern, traditional and folk art, all under one roof. Over several decades, Das has built a large collection of modern art, antiquities and handicrafts for the Centre.