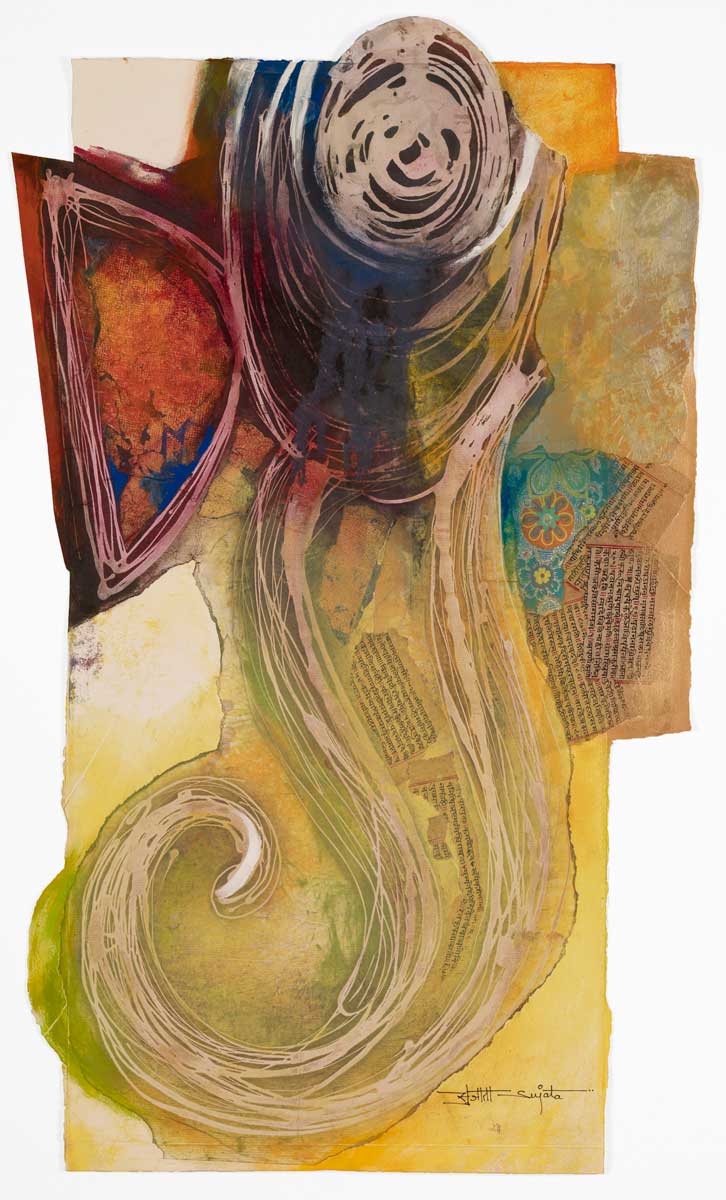 Art Alive Gallery presents Ganapati, an exhibition by Sujata Bajaj on the forms of Ganapati, which, though profuse, is a genre apart from what she is majorly known for. Celebrated as an abstract colourist, this exhibition brings into light her lesser-known side in which Ganapati has been a constant companion. Ganapati is not a new chapter or a turning point in Sujata’s works. He has been a lifelong preoccupation, but even though he is not part of her mainstream work, he is like a constant refrain underlying her journey as an artist. She has painted, etched and sculpted him for decades, yielding an artistic abundance that is happily contra distinct from her early life. For Sujata, Ganapati poses as an inexhaustible and endless source of creativity which she has explored since the beginning of her career. Almost 30 years ago, she recalls taking solace in obsessively and intuitively drawing the image of Ganapati when she was confined to bed because of an injured foot. The process ultimately took shape as a lifelong preoccupation for her, transforming and maturing through the years, culminating in the exhibition Ganapati. While it may surprise most of her viewers this exhibition seeking to capture the essence of Ganapati using a diverse set of techniques as well as a variety of materials, The exhibition showcases a collection of sculpture, mixed media and etching-collages. Throughout her artistic life, she has explored different materials in her works. For Ganapati series, she has brought out her treasure of materials that she has been collecting over time. Somewhere in the shadows of the works, one finds omnipresent pieces of old original Ganapati miniature, gold foil, newspaper clippings, musical notes or fragments of texts, lending each piece with its unique texture and quality, musical notes or fragments of texts, lending each piece with its unique texture and quality.

The beginning of the journey

Deeply embedded in Indian culture and present in many ways in myriad households, Ganapati has been the subject for artists and craftsmen since times immemorial. But hardly any artists have embraced the figure the way Sujata has done. The inexhaustible character of the form explains why it has taken the artist more than 30 years for this project to mature. For any artistic project, an incubation of this length is something quite out of the ordinary. It all started in the most unusual of fashions when confined to a bed for a long period due to an injured foot, Sujata started to make drawings. She did this obsessively, as if guided by a power beyond her own, each new drawing building on the previous with some variation but always pointing at the form of Ganapati. At later stages, new techniques and materials were called upon giving the project a depth and variety rarely seen in Indian art. It was also intensely personal, something the artist did not feel like sharing with the world – till now. Perhaps it is Ganapati himself who is now guiding and giving shape to her unique vision. Having pursued an active and focused career as an abstract colourist in India and internationally, this extremely personal exhibition – a departure in Sujata’s career – marks a seminal moment. Speaking on her inspiration, this is what Sujata Bajaj has to say of her muse: “To me, Ganapati is endless. I feel a sense of complete freedom and liberty in abstracting his image. No other form lends itself as vividly to the abstract as Ganapati. When I paint him or sculpt him, I am certainly not painting or sculpting a god. I am, in fact, through the process, experiencing my own artistic freedom, and the immense joy intrinsic to that freedom.” Consisting of a wide body of work spread over three decades, Sujata has used the occasion to create an extensive body of fiberglass sculptures which cross-pollinate her earlier drawings, etchings, and collages. Coming together, they present a formidable – and personal – a collection of work that we are privileged to view.

Sujata Bajaj was born in 1958, in Jaipur, Rajasthan, India. She graduated and Mastered in Art and Painting from Pune, Maharashtra. As the influence of tribal art and culture led her to a Ph.D. on Indian Tribal’, which titled ‘The special features of Indian Tribal Art and its influence on Contemporary Trends of Art’. She also studied at EcoleNationale des Beaux Arts, Paris, on French Government scholarship in 1998-89. She has held around 30 individual shows in India and over 20 international shows and participated in more than a dozen group shows across India and abroad including U.K., France, Norway, USA, Singapore, Dubai among others. She has also imparted talks on Tribal Art at George Washington University, USA; Princeton University, USA; Commonwealth Centre, Edinburgh, UK; EcoleNationale des Beaux-Arts, France amongst others. Several books have been published on the works of Sujata Bajaj, the recent amongst are ‘Sujata Bajaj’ written by Michel Waldberg and ‘Sujata Bajaj, L’Ordre du monde’ written by Jean- Claude Carriere & LoretteNobecourt. Her works are held by various National and International Collections, like the: Lalit Kala Akademi, Maharashtra State, Air India, Philip India, World Bank, Indian Merchants Chambers, Solidaire International Marketing, Cultural Ministry of Norway, Philips Holland and several other private and public collections around the globe. She was conferred with Chancellor’s Award, S.N.D.T University, Mumbai, selected for International Youth Achievements by Cambridge University, the U.K. in 1986 and also the holder of ‘Raza Award ’in 2003, Bombay Art Society Award and the Maharashtra State Art Award. Sujata Bajaj spends her time between Paris, Dubai, India, and Norway.