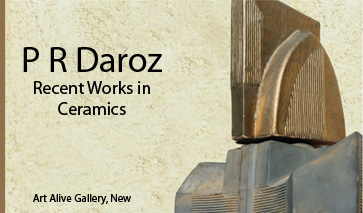 Objects dissolve in to a sculpture, a sculpture into a mural, a mural into an architectural complex and, finally in to an unprecedented architectonic configuration in space and time.

The threshold marks an invasion as well as an intimate experience of a space that is both private and public. As the panels, wall surfaces, and guardian forms grow and diminish the meandering journey evokes the primal, primeval memory of touch. As though etched and tattooed on flesh, marks of the excavated and fossilized material and transformed in to myriad prismatic visions which are transient and, at the same time, move towards the future.

Daroz's work is significant from the perspective that his work bridges and negotiates the connect between the aesthetic and the functional with immaculate ease and spontaneity. Both in skill, scale and technology, the past reinvents itself in an urban environment through a seamless continuity. The images are not only voluble of their urban context, but also a comment on the structured, chiselled futuristic streamlining of forms , fortified through faceted glistening metallic volumes and surfaces.