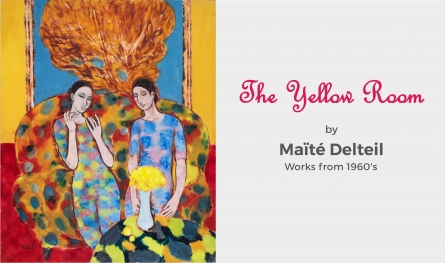 The predominant affect of Maite Delteil’s paintings from the 1960s is a sense of freedom in the deep intimacy that is primarily reserved for oneself, in private chambers, away from the prying eyes of the world. Growing up in the countryside of France, Delteil’s context was relatively conservative, where women were not allowed the freedoms that they could access today. Yet, empowered by travel — she spent time in Spain and Greece on a scholarship — and her education, the artist transcended her circumstances to grow as an artist, and also marry the man of her choice — the Indian artist Sakti Burman, to her family’s displeasure. In these early works, the ostensible comfort of her subjects in their own skin, and radical self-love appear as forms of resistance against a patriarchal structure. The domesticity that one view in Delteil’s paintings is not the domesticity that is traditionally ascribed to women as their responsibility, but one that Virgina Woolf would have approved of; women in rooms of their own, occasionally with each other, but always without a man in sight.

While Delteil has always acknowledged Henri Matisse as inspiration, especially for his use of colour during the Divisionist period; she developed a distinct language from the vibrant complementary colours in her canvases. Just as Paul Gauguin sought escape from the industrialized society of his time in Tahiti — which he perceived as untouched by civilization and primitive — for his work which depicts the region’s imagery in bursts of colour, Delteil withdrew inwards for similar liberation. In this series of works, the freedom she sought from social constraints was not found ‘elsewhere’, but within. The interiority that she seeks receives metaphor in the interiors of her home while subscribing to the bright colours that had also aided Matisse and Gauguin before her.

Her use of yellow, the brightest colour that the eye can register, also the colour of the sun, opens up the rooms in her works from being stuffy and claustrophobic. She lends them an outdoor-like quality, as if in broad daylight, reminiscent of her later works, where the subject matter is indeed placed under the open sky, to be observed from a distance, contrary to the immediate encounter predicated in the works on view here.

In the airy, light-filled spaces in Delteil’s world, women lounge in all their nudity, immersed in contemplation. They are pensive dreamers, claiming an agency denied to them by their prescriptive realities. Delteil intervenes with her subjects that are endowed with subjectivity in the tradition of painting where women had always been objects’ at the receiving end of the male gaze. But what one sees is not the weight of the world on their shoulders — suffering in anguish or tormented by existentialist angst — but lightness and joy. Indoors, all by themselves, they are free to roam the terrain of their own imagination without boundaries. This transgression further acquires the tenor of fantasy through Delteil’s vivid colours.

Towards the later part of the 1960s, Delteil spent time in Japan, where she would have encountered ukiyo-e woodblock prints and paintings. Their influence on her work in evident, in the same way, they had influenced the impressionists before her. A portion of this influential art movement in Japan deliberated on women occupying scenes from every day, especially during those inconsequential, commonplace moments, and it is Delteil’s similar focus that allows the more elusive, rich interior lives of her subjects rise to the surface within her works. It is also hard to ignore the recurring mirrors in the works on view, a motif that is familiar to the floating world as well, in works by artists such as Kitagawa Utamaro and Hokusai. The casual proximity that Delteil’s subjects maintain with mirrors, in which their countenance is starkly visible, reinforces the artist’s focus on interiority. It also affirms the women’s agency over the gaze that falls upon them, and consequently renders them the masters of their own destiny. Contrary to what her milieu dictated, in her works, Delteil paints a world where her women are empowered by the right to define themselves, can indulge in their own thoughts and dare to dream.

These works, made shortly after she moved to India celebrates how she viewed her past differently in the light of the glowing Indian sun. These typically European tableaus, reimagined in bright hues that could be associated with regions closer to the tropics is also indicative of the artist’s predicament, as a foreigner, who had to reassess her outlook towards life for an entirely different culture. Yet, ‘The Yellow Room’ is universal for the ideas that they unravel, empowering the feminine impulses that reside in all of us.