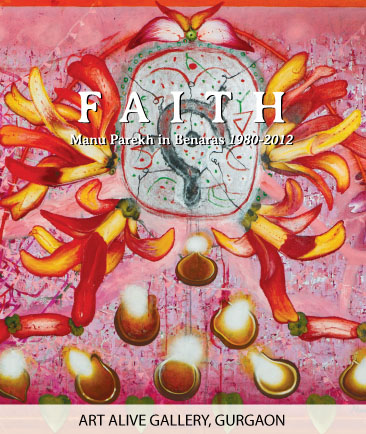 Art Alive Gallery presents the eminent artist Manu Parekh's work in Benaras and is the first major solo show held in Delhi in over six years. Parekh first went to Benaras in the throes of an artistic crisis and traveled the Ganga by boat, all the while observing the life of this ancient city at various times of the day and from various perspectives. Later, he got off the boat and climbed the ghats; here he saw the temples and the people conducting private rituals in common spaces. Flowers, festivals, faces and rituals all became fodder for his work. These repeated visits to Benaras gave his practice a new direction and his works visual coherence and intensity. It allowed him to imagine a modernity that embraces the everyday life in India’s provinces. Faith presents this body of work from the perspective of a painter engaging with vernacular religiosity and spirituality as well as from the perspective of Benaras as a place that has shaped the subjectivity of many modern artists in the twentieth century.

Organized into four sections, the exhibition begins with “Glimpses from a Boat” that has his virtuoso modernist, landscapes of Benaras, which Parekh developed along his journeys on the Ganga. The paintings are richly hued explorations that depict the artist’s experience of the corruption, beauty and sheer force of Benaras, an antique city in which there are many shadows formed between the light and the darkness. The second section, titled “Transformed Stone,” celebrates the hopes and desires that humans bring to objects they deem sacred. If landscape is the transformation of natural scenery into cultural artifact, then Parekh’s paintings specifically render the simultaneous elevation and domestication of the sacred. “Repeating Forms,” the third section, uses the concept of repetition, a process which has long fascinated Parekh, to arrive at something profound about making art and revisiting familiar visual tropes and places over an extended period of time. For the artist, repetition always holds the possibility of something new, without necessarily creating alienation from the familiar. The exhibition closes with “Flowers,” in which Parekh telescopes into the sexual, sacred, otherworldly interior of forms that exist in the world as interior decoration, as items of worship, as objects of study and as still life. In Parekh’s hands, flowers become parts of the human body and contemplating this idea allows us to become more intimate with our own embodiment.

The exhibition thus stands as a journey from the exterior to the interior much in the way modernism has allowed artists to objectify subjective, individual experience for the aesthetic contemplation of others. Accompanying the show is a soft-cover catalogue with essays by Annapurna Garimella and Baishali Ghosh.