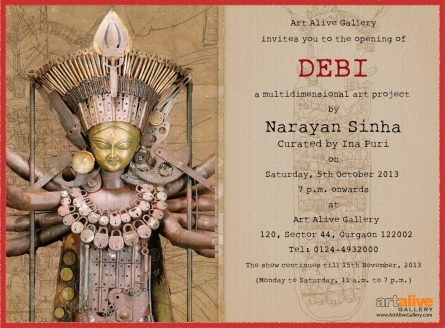 Skirting Murshidabad, Nalhati is a bustling mofussil town where trucks halt to repair damaged parts or for the truckers to rest before hurtling off to their destinations in the big cities. Tourist buses rumble in too-- spraying dust on the little children playing on the roads, their destination being the Kali temple, in the town, considered to be an important ‘pithasthan’ for the Hindus.

Unlike his parents, regular temple-goers, Narayan Sinha, did not visit the mandir so often. For him, the goddess worshipped by the faithful resided not merely in the hallowed precincts of the temple but also in other places, like the junkyards that spilled over with debris around or then elsewhere, like in the little shops that traded old ‘kansha vessels for new ones. It was especially in neighbourhood’s ‘kansha’ shops that he was destined to discover his own Aladdin’s lamp, an object that he would eventually transform into an integral part of his sculpted Debi the day he started working. From his early, tentative days when he began his artistic practice, Narayan’s sculptural forms made use of the recycled and sustainable in a way that was quirky and imaginative. Narayan’s present show, entitled DEBI is a series where the sculptor presents his recent works in the capital. The images of Debi here are skillfully sculpted and assembled using cycle bells, bent rods, twisted machine parts, jugs, ‘ghotees’, even other unlikely bric a brac that reveal their true avatars on only close inspection! Like,for instance,the necklace that you were admiring from a distance being, actually, a row of ancient locks or watches with their numbered dials still intact! Elsewhere, there is Lakshmi, represented by a little sari-clad girl, dangling her legs atop a treasure chest. Ganesh is a bohurupiya holding aloft a mask of the elephant god and Kartikeya is the photograph of the local vendor boy at the Railway Station, selling ‘muri’! Incomplete straw models of Saraswati seated on her swan line up in a corner while the lion roars, his teeth bared, majestic and grand even while a closer look reveals the rusted metal parts of pipes and handlebars it is created from.

The sculptor/installationist thus recreates a bygone era, with fabrics, photographs, and clippings of celluloid, written script, paintings, sculpture and installations that utilize and recycle the rejected and abandoned. His query: is his Debi too an abandoned creature at the end? To be immersed and forgotten? And in this quest of thought recurs another question; like his Debi are women too deified to be abandoned in her hour of need?

The chandeliers (again created from antique ‘kansha’ jugs and lamps) illumine the magical labyrinth and you can imagine the chanting of a purohit’s voice in the distance, the pealing of bells as mantras ring out. Yet, despite this elaborate enactment that is a visual treat to the senses, for the artist it is no more than a parody of rituals. A pantomime of worship accorded to public and private memory.