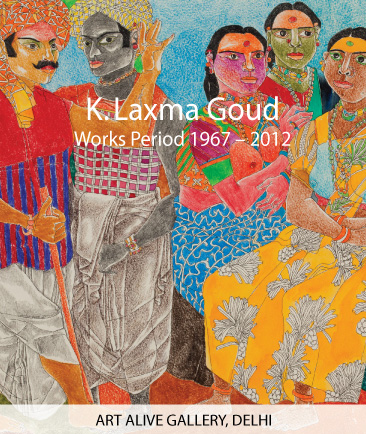 Art Alive Gallery is pleased to present the solo show of well known artist Laxma Goud featuring the works from 1967 till the present time. Opening on 18th February, 2012 at Art Alive Gallery, the exhibition will be accompanied with the release of a book on the artist.

This exhibition will highlight Laxma Goud’s prolific and versatile art practice which spans nearly half a century. At the center of Goud's practice lies the magic of making an intense, passionate communion with tools, techniques and materials, as motivating and sustaining as the figures that emerge from burlin, pencil, ink, water colour, paper and terracotta.

Very early in his career he drew attention in the art world for his technical expertise and the light hand with which it was deployed and for his startling, refreshing take on rural India. Laxma offered something new and audacious. His vision of the rural extolled its place in the natural world, a realm roiling with sexual abundance.

Laxma discovered drawing and making things as a child in Nizampur, in a poor, remote region of Andhra Pradesh. Laxma completed a five-year course in painting and drawing at the Government College of Fine Arts and Architecture in Hyderabad. But he became an artist during the time he spent at the art school of Maharaja Sayajirao University in Baroda learning traditional mural techniques under the mentorship of K. G. Subramanyan. During his year and a half there (1963 – 65), encounters with teachers, artists, and fellow students opened his eyes, let loose his imagination, fed his intellect, and built his confidence. He began to explore expressions of the erotic impulse and to experiment with representing the libidinous in his own drawings, including one that riffs on Picasso’s orgiastic minotaur drawings.

From the 1980s onward, Laxma’s most successful works convey at once the elemental ordinariness and the deep humanity of people like the villagers of his childhood. His drawings establish their presence within the natural world and imbue them with strength, passion and tenderness. Extending his experiments with media further, Laxma used sculpting in terracotta as the foundations for working in metal, casting bronzes, channeling the flow of molten alloy to form icon-like female busts recalling goddesses of fertility and abundance.

The arc of Laxma's fifty-year practice has had strong anchors. A passion for line, the making of line as a sensual act; a reverence for color, a respect that led him never to take color for granted; the unwavering presence of sensuality in media and process and the reverence of a lover in his approach to materials and subjects.