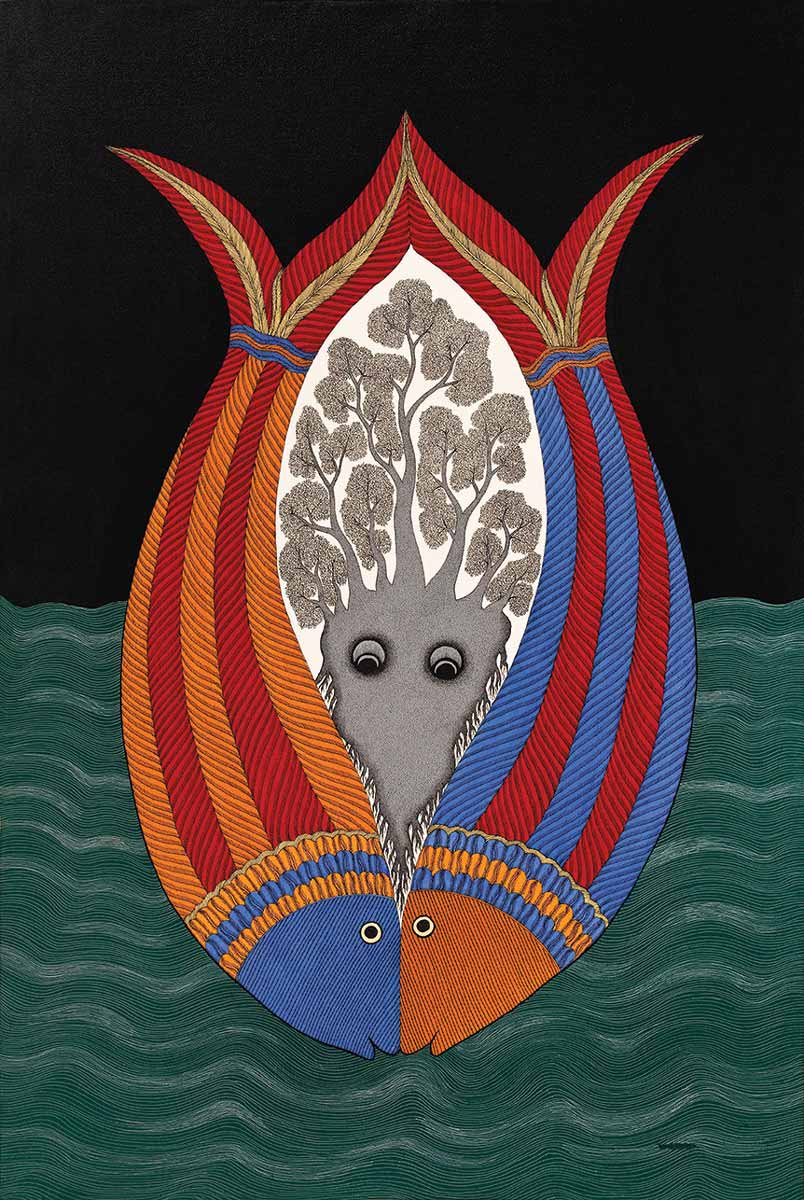 Traditionally, members of the Pardhaan community were entrusted with the important task of keeping track of the Gond family trees. In addition, they were also the community musicians. When the social standing of the Gonds dwindled, however, the provisions they formerly made for the Pardhaans dried out. The latter community then gave up their past bardic traditions and resorted to various forms of manual labour in order to survive.

A chance encounter with artist J. Swaminathan however altered twenty two year old Jangarh Singh Shyam’s fate drastically. A member of the Pardhaan community Shyam was ‘discovered’ by Swaminathan and brought away to work as a muralist on the Charles Correa designed art Complex, Bharat Bhawan in Bhopal. A string of national and international exhibitions and workshops followed soon after. In 1985 Shyam was also awarded the Shikhar Samman by the Madhya Pradesh Government.

Shyam’s relative success in the art circuit breathed new life into the withering community, providing the ancient artistic spirit of the Pardhaan’s a fresh, new, exciting creative impulse. Soon several other members of the tribe followed him, embracing his pioneering style and effectively announcing the community’s crucial and creatively challenging leap from the medium of songs and music to that of the brush and canvas. Shyam’s work, thus, not only epitomized a completely new artistic idiom but also resuscitated a community, striving to stay afloat in the face of a range of modern day adversities.

In honour of Jangarh Shyam’s strikingly remarkable contribution to his tribesmen culturalists have come to dub this particular style the ‘Jangarh Idiom’.

The scornful disregard of the domestic and diaspora collectors notwithstanding the international art market has promptly woken up to the Pardhaan artists. French gallerist Herve Perdriolle, who began collecting Indian tribal art in 1996, provided the artist crucial leverage in the global art scene. In April this year, cultural historian Jyotindra Jain’s massively attended exhibition in Paris, Other Masters of India: Contemporary Creations of the Advivasis, also helped highlight the ‘contemporariness’ of these works. The series displayed in Jain’s show was an attempt at tracking the ‘progression’ of the artistic rendering of communities such as the Pardhaans, showing the artists’ gradual departure from a ritualistic, community oriented idiom in favour of a more individualistic (and therefore modernist) lexicon. These ‘modern’ renderings of the Pardhaan artists amalgamated the intensely variegated mythology of the community with references from their encounter with new technology, globalization, state enforced displacement and of course the new art world they were now a part of.

Jangarh Kalam, is a unique exhibition bringing together an oft ignored group of artists who have effectively contributed to a renewed interest in the ‘modern’ experience, in this part of the world. So far, precious little has been done in India, to honour the Pardhaan artists in the same terms as their urban counterparts, this exhibition is a small step in that direction.