Maite Delteil - The Garden of My Soul 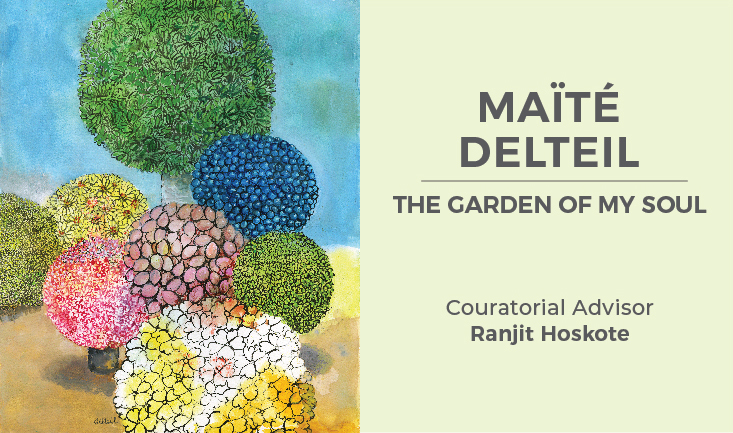 Maite Delteil - The Garden of My Soul

The Garden as Paradise

The soil is where everything begins and everything ends. Fertile and fallow in alternating cycles, it sustains all life. The delights it generates – flowers, fruits, the arrival and departure of butterflies and birds, the magic of sap and pollen – replenish our spirits and our imagination. As it goes into eclipse, with the onset of winter or drought, it takes our hopes with it. In the spring, or with the resurgence of rain or water from deep aquifers, it releases the fragrance of revival into the air and animates us with fresh possibilities. The soil is the key element that unifies Maïté Delteil’s lifelong evocations of a highly specific landscape – the idealised garden, with its seasons of fruiting and flowering, of barrenness and fecundity.

Delteil’s garden forms a focal point of prayerful attention, especially, in this epoch of climate catastrophe. How do we reach for the reassuring harmony of plant life when deforestation and the violation of the mineral depths have denuded large tracts of the earth? At such a time, Delteil’s evocations of the garden remind us of the sumptuous natural world from which we, as a species, have alienated ourselves. Here we come upon shrubs and trees, offering us an abundance of beauty that has no objective purpose, no ulterior motive other than regeneration. Here, too, we come upon a diversity of birds, robins and ringdoves, grebes and magpies, courting, mating, hatching, enchanting the world with birdsong.

The garden is an image of paradise. It reminds us of the peri daeza, the walled enclosure of the angels in ancient Persian myth. It reminds us of the hortus conclusus, the enclosed garden, a symbol of the Virgin Mary’s sanctity in Catholic iconography. It summons us back to the unspoiled reaches of nature, before temptation and evil, greed and competition, to Eden and Arcadia. For Delteil, the garden carries the resonances of her sylvan childhood in the village of Martiloque, in France’s south-western province of Lot-et-Garonne. She grew up in the neighbourhood of a family orchard of cherry, apple and quince trees, bursting with the promise of gooseberries, pumpkins and red currants.

As we gaze upon Delteil’s paintings, we recognise them to be enactments of the profound gesture of blessing. They affirm the principle of vitality, of resilience, of the glory of an earth in which humankind accepts its role as patient gardener rather than brutal expropriator. Delteil’s paintings are beatitudes.