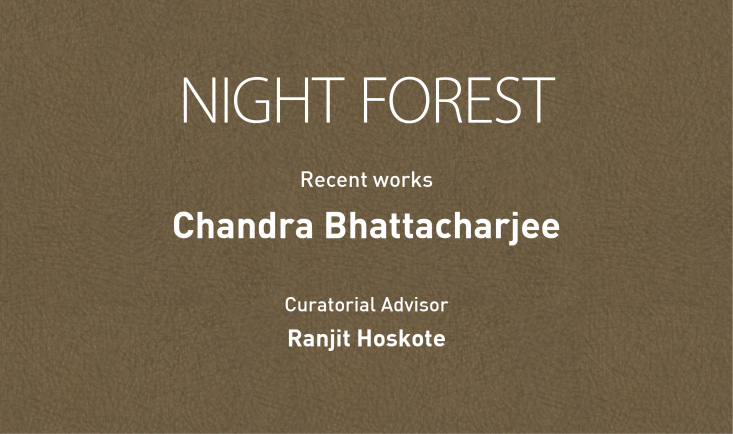 Chandra Bhattacharjee’s recent paintings take the form of mysterious nocturnes: evocations of the forest at night, a forest in retreat at the edge where urban life meets and exerts its expansionist pressure on the natural world. In these paintings – most of them rendered in a rich spectrum of greys calibrated between pearl white and charcoal black, with occasional undertones of lignite, sepia and indigo – we come upon vegetation that has been rendered translucent, deer whose eyes gleam in the glare of intrusive headlights, and strange neon batons, reflections of metropolitan lighting that float in and out of glades and thickets that, we fear, will soon pass from the wilderness to the realm of construction.

This suite of paintings has been developed, as is customary with Bhattacharjee, through a demanding and time-intensive process that involves the creation of a conté base on the canvas, luminous acrylic laid on in matte layers, and a surface of delicate, meticulous brushwork hatched to resemble craquelure. Strikingly, the point of vantage from which these paintings are presented is an intimate one, so that small-scale events assume an epic scale. Take, for instance, a painting in which a dead flower, in white, occupies our field of vision. Beyond it, we see a group of people dancing, shadows shivering at nightfall. Are they lost, beyond trail and signpost? Are they predators hunting down hapless prey? Are they, like the bohemian nomads in Sunil Gangopadhyay’s Aranyer Dinratri (Days and Nights in the Forest, 1968), revellers attempting to connect with lost intuitions and sensations in a zone beyond the numbing routines and self-alienating conventions of city life?

When Bhattacharjee shifts his focal length, he bears witness to the humankind’s bafflement in the context of an ecology it has devastated through its wilfulness, its obsession with the primacy of its own appetites, its brusque abrogation of the claims of other species. In works that suggest the spectral, shimmering quality of film negatives, the artist dwells on a solitary figure drags a rope or hose through emptiness, a forest bursting into flame, an old man guided by a blind crane, a donkey and a bush isolated from all guarantees of habitation. This magisterial body of recent work resonates with the thrum of scorched forests, the interplay of shadow and spangle, dark waters and the streaking trajectories of meteorites. In a large-scale charcoal drawing on paper – a drawing-installation – Bhattacharjee invokes our self-crafted predicament in the most archetypal yet urgently topical manner. A man in contemporary clothes has fallen on his knees, his hands held out, before a burning bush that bends in a wind, its sparks arcing above him like fireflies even while he remains mantled by darkness. Is he a prophet receiving illumination, or a survivor confronting catastrophe? In the extraordinarily moving works gathered to form Night Forest, Chandra Bhattacharjee brings us face to face with the wasteland of a future that we have engineered for ourselves.