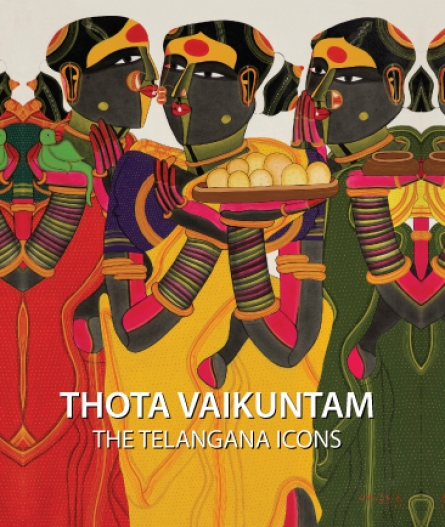 Art Alive Gallery is extremely pleased to announce an exhibition of new paintings by the acclaimed Indian artist, ThotaVaikuntam in collaboration with Grosvenor Gallery, London.

Through his distinctive style, ThotaVaikuntam has enriched Indian Contemporary Art with noteworthy visual imagery. Practicing over five decades to the contemporary times, he has worked towards erasing the distinction between high art and folk styles. Vaikuntam immortalizes the simple and rustic rural folk of Telangana region in southern Indian through theatrically posed large iconic forms. Their characteristic bright traditional costumes and austere ornaments come from the mythic moral plays that are popular among the rural masses in the region. Actions and gestures of his female figures which are often characterized by subtle masculinity, are representative of power and grace. Rendered in his signature style, the portraits of men and women are seen indulged in themselves; the simple yet powerful imagery contributes towards depicting an innocent and uncontaminated life, giving a whole new sense to living.

Vaikuntam paints radiant and elaborately dressed men and alluring women from the Telangana region. His muse is the sensuous and voluptuous woman of Telengana with her omnipresent vermilion bindis, draped in colourful sarees that highlight the warm glow of her dusky skin. As Vaikuntam says, “That rustic simplicity holds enormous appeal and charm for me. Let me tell you, though it has taken me whole lifetime of work, I am still working at getting her perfect.”

The artist’s work has a sense of strength to it, a power that emanates from the paint or charcoal that he applies to the surface, his controlled lines as well as the fine strokes that he executes. He generally uses only primary colours, as he believes that composite colours do not exist in nature and are therefore, unnatural.

Vaikuntam is testimony to enormous changes in the Indian Art tradition since five decades. He has experimented with multiple forms, mediums and thematics; learnt either at the academy or actualized responding to inner enquiries. His body of works produces as well as reflects several layers of signification. As the iconic image of rural folk, it is narrative of a lifestyle where each frame with its full blown form is both personal and communitarian.