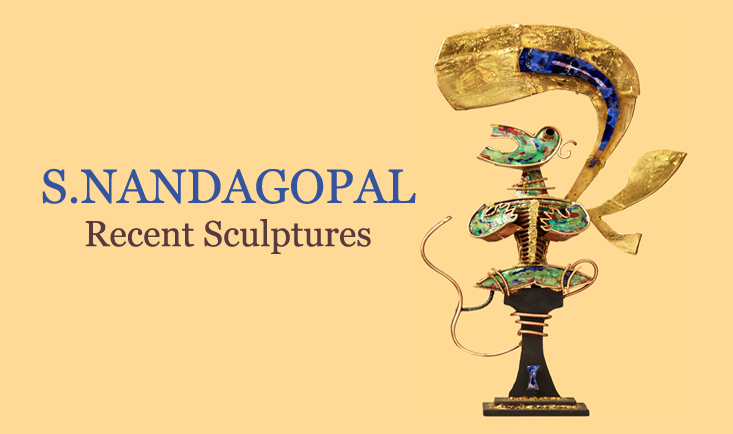 Art Alive Gallery presents a solo exhibition of S. Nandagopal’s sculptures on the occasion of the artist turning 70 this year. The exhibition showcases 21 recent works of metal that tell stories of India’s mythology and South India’s cultural tradition in a contemporary form. Several figures have been taken from Hindu mythology and the epics, yet the sculptures are far from being provincial or ethnic, being infused by Nandagopal’s innovative style.

Nandagopal is amongst the first group of artists to move into Cholamandal Artist’s Village near Chennai, the only artist’s residency of its kind in the country. His works are inspired by the rich ancient techniques he practices at the Village.

Painter, metal worker, and ceramist turned into a sculptor, Nandagopal magically transforms our strong traditional roots into a super-contemporary idiom that is uniquely his own. His figures mostly resemble deities from Hindu mythology, but his themes are very contemporary. Through his works, he tries to tell about our rich past.

He is one of the few sculptors who is continuing the tradition of ‘frontality'', one of the defining characteristics of the Madras Art Movement, started by his father KCS Panicker. Though contemporary in form, Nandagopal often uses traditional techniques to create his sculptures like enameling, engraving and silver plating.

Nandagopal prefers to give the title of his sculptures that can easily connect them with India’s most ancient images. Each sculpture gives evidence of a remarkable creative synthesis of ancient forms and themes with old and modern techniques and sensibility, creating a new form.

S. Nandagopal, born in Bangalore in 1946, lives and works in Cholamandal artist's village near Chennai. He has received his Diploma in Fine Arts from the Government College of Arts and Crafts, Madras in 1971.