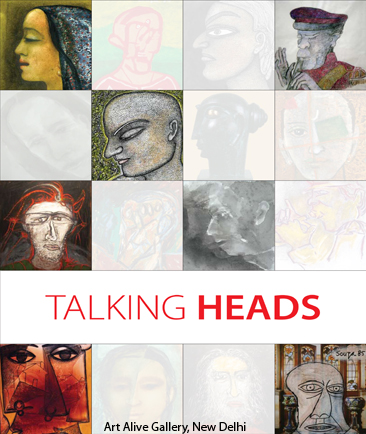 Art Alive Gallery is happy to present works of senior and eminent contemporary Indian artists who all, in unison are addressing a unified topic: heads and portraitures using significantly remarkable language that suggests intensity, depth and creativity.

The show will incorporate works of artists in any media including all interpretations and portrayals of the human head, from the traditional to the abstract and conceptual.

Interestingly, artists literally get into the head of their chosen subject to interpret in a truly nuanced and rhythmic pattern, the characteristics of the human head. With their meticulous precision, they exhume the many shades of what the naked eye testify as mere human head or portraits of individuals. They breathe in life, emotions and moods with their mastery strokes.

The rich amalgamation of works is replete with the artists’ well-known usage of different signs, patterns, colours and a touch that is distinctly theirs.

Akbar Padamsee’s pencil on paper, watercolor on paper, or, oil on canvas manage to capture a rather subdued and frail profile of a man. His work is seen to alternate between two major genres, luminous metascapes: his signature works, and the human figure which he continues to imbue with an arresting presence.

Anjolie Ela Menon’s early canvases may bear influences of Van Gogh, the Expressionists, Modigliani, Amrita Sher-Gil, and M. F. Husain; however, her portraits are “dominated by flat areas of thick bright colour, with sharp outlines that were painted ‘with the vigour and brashness of extreme youth.’ Her figures are soft, demure and there is a certain language of calmness written all over their expressions.

FN Souza, who is known for his inventive human forms particularly the heads, obviously has powerful images that have the ability to leave viewers to see visions within themselves. Using interesting motif and colours, his figures more than just come alive.

Jogen Chowdhury who is known for his dexterity to fuse traditional imagery with the zeitgeist of contemporary painting has given attention to figures that are replete with expressions and depth.

Krishen Khanna works bear an interesting testimony of his journey. The textures on his figures do not merely appeal but they speak a thousand words.

Manu Parekh’s “Prophet,” an impressive version of a bearded face with a slight disheveled look on acrylic on board is intense and deep. His fondness for bright colours still visible as the body is draped in red garment. There is an element of fantasy in the artist’s works while expressive eyes and intensive look in their eyes are quite arresting. He uses wet oil impressions of colours to give the figures a profound appeal.

Paresh Maity’s mixed media on paper for instance, are the artist’s experimentation with abstracts with a focus on the figures, specifically the faces. They come in myriad expressions. It is his love of vibrant colour that is once again set to dazzle the viewer. The cubistic faces sometimes remind viewers of Picasso’s heads. Clearly, he has let his imagination run wild with his figures that has expressive eyes. Could they be telling a story? No doubt, the stylized and simplified yet complex figures of heads have a story of their own.

“It is in keeping with the uniqueness and depth of the subject, that we intend to look at works by these masters who have created works of human head and portraiture and have thus, given kaleidoscopic interpretations to this subject,” says Sunaina Anand, Director, Art Alive Gallery.
View as Grid List