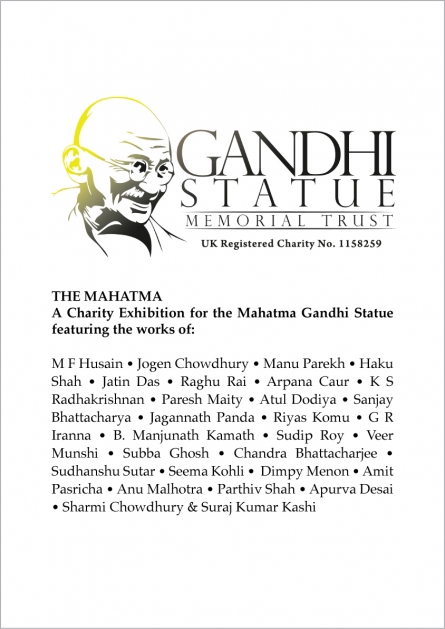 For the first time ever, the works of some of India's best known artists will be displayed together to reflect the life and work of Mahatma Gandhi, on 13th December, 2014, in a charity exhibition and sale in Delhi, to raise money for the Mahatma Gandhi statue in London.

This unique endeavour has brought twenty eight artists together who are generously sharing the proceeds of the sale to install the sculpture of Mahatma Gandhi at Parliament Square, in London.

Lord Meghnad Desai who has set up the Gandhi Statue Memorial Trust to raise money for the Gandhi sculpture from all around the globe said ' It is a wonderful gesture on the part of these renowned Indian artists, who are supporting not only the statue of Mahatma Gandhi at Parliament Square, but also the work of a fellow artist and sculptor, Philip Jackson, who has created the statue.

'This reaching out between India and UK, through these artists, is only befitting, because Gandhi belongs to the whole world. He spent his early life not only in India, but also in London. Indeed, many of the works in this exhibition and sale reflect the international influence that the Mahatma continues to enjoy...in art, in philosophy, in politics. I would urge all admirers of the Mahatma from around the world to buy these wonderful pieces of art, and add to a historical legacy.'